After leaving Geoff we headed for Renmark on the Sturt Highway about 80 Kilometres west of Mildura.  I loved the drive, the road is good and unbelievably straight, it rarely ever changes until you get closer to the border. The van tows so well that I hardly know it’s behind me, for somebody like me who’s has never towed a caravan before, I’m very comfortable with our little home on the back .  I’m also surprised, for the amount of kilometres we’ve done it hasn’t used as much fuel as I expected.  Geoff told me it’s because the Murray runs down hill all the way and it makes a difference to the demand on fuel, I’m not sure if he’s not pulling my leg, I thought distance and consumption of fuel would be equivalent.  Then I started thinking the world is round and I am going downhill and then the whole thought got a little odd, so I just have to accept Geoff is a man and they seem to have a better understanding of how this fuel consumption works.  I bet there are a whole lot of people out there now wanting to explain the theory of gravity, speed and distance to me.

The trip took us across some beautiful country side, an enormous span of shrubs and salt bush with scatterings of distorted hand shaped gum trees, all complimented by red, sandy soil and blue skies, this trip has made me feel so patriotic and proud to be Australian.

While we drove, Scott wanted to discuss why I told his dad he had lost interest in doing art, I was surprised he was so annoyed about what I had said and yet another learning curve for me to be more aware about what I say, Scott does have rights and an opinion about himself and what he does.

I apologised for not discussing it with him first and we talked about what we could do to help him get back to enjoying his art.  Scott is a very good drawer and has a natural sense of perspective and colour, one of his pastimes is drawing very small pictures, reproducing the games he plays in his head, he has designed a written language of his own by drawing coloured patterns into boxes, each of these boxes represent a story or character.  He loves doing these stories, so I suggested he builds his art style around using the same interests and skills to develop individual pieces.

Geoff hadn’t even boarded his plane and we were half way to Renmark in South Australia. I’m amazed how you can cross over an invisible line differentiating the owner ship between two states and in the same time the landscape changes so quickly, the land we left behind was flat and scrubby, now we were in almost marshland with enormous crater formed valleys covered in blue grey stubbly bushes and dark green scrubs. Typical South Australian gum trees stood out in large lakes of water, skirted by orange cliffs and granite walls.

As we followed the Murray River trail and crossed into our new state there were signs everywhere stating, no fruit is allowed to be brought into South Australia, fair enough; with the amount of fruit orchards and vines in both states the threat of fruit fly and other contagious diseases could destroy these industries. Under the big arch we drove where we were directed into a parking bay and a very formal, uniformed inspector gave us the chance to confess and surrender our forbidden fruits.  As I approached I did a quick mental inventory of what fruit we might have on board  and felt very relaxed we were clean, then I suddenly realised we have a caravan fridge full of fresh fruit and veggies, plus fresh tomatoes we bought when we picked up Geoff from the airport a couple of days earlier.  I felt a tinge of guilt and confessed as the inspector asked to look in the van that I had completely forgotten about the fridge and its contents. I must say the inspector was very polite and appreciated my true confession, we still opened the van and she took all of our fresh fruit and veggies and we were left with a piece of ginger and some carrots. As I got back in the car I watched as I waited for the caravan in front of me to move on and I thought what a waste as the inspector dumped all our tasty morsels into a bin. On we moved, then it started to rain, the first real rain we’ve had since we left Melbourne.  As we approached Renmark it bucketed down so we stopped at yet another delicious bakery and had lunch.

As I was paying at the counter for another round of home-made pies and mouth-watering cakes Scott found a seat and he was already chatting to a nice young man, who appeared to understand and interact quiet well, so I left him to it, as I heard him resounding how fat he is and how he’s not going to eat any rubbish today.  I joined them and chatted, and then we decided to push on to Loxton because it was only 12.30 and we still had lots of time. I’m glad we did, Loxton proved to be a very good central point for visiting surrounding areas the next day.

Loxton is a very nice community right on the edge of the Murray River, full of history and another pioneering settlement. Our camping spot was perfect, right on the banks of the river with a wide beach front and enormous old river gums, fat and lazy just biding their time in the sun.  As we pulled in Kangaroos leaped across our path and there was an endless variety of birds. I remember seeing or hearing something that stated birds are related to reptiles, I imagined a snake getting up one morning and saying to his mate “Today snaky mate, I’m takin’ up flying!” so where did birds come from, check out www.thewildclassroom.com.  I think Scott has taught me to look up Google for all my questions and I would highly recommend it. On our adventure I decided no TV, no radio, no newspapers, another one of my better ideas as it forced me to find ways to entertain myself and brought out skills I never found time for, such as painting and writing.  I’m really enjoying the exploring and learning to trust myself to try new things. By the way I haven’t missed one of the mentioned media types and I’m sure my confidence and belief in mankind has been much more positive without a constant bombardment of the worlds troubles.

There was lots of room to park our van so I just drove it in and with all the skills of pro campers Scott and I unhooked and prepared the van for the night.

With still some day light left, we went exploring in town and of course, coffee time.  While we were there we bought a big packet of Textas, a medium Scott loves to work with.

Back at camp, Scott agreed he would like to see what he could do after our earlier discussion on a new art style.  Before we got started we had to do some camp duties such as the washing.  I had just got back to the van and I was approached by a man who said “Sorry lady, you’ll have to turn that van around the other way and take down that washing line.” He was very nice and just following the rules. I didn’t know that there are standard rules in all caravan parks about which direction to park and clothes lines. I said “What, are you crazy?” It was one of the best unloads and set ups we’d done so far! “No lady all tow bars have to face on to the road and somebody might hurt themselves if they walk into that cloths line you have up.”

How precious has our society become?  There were my undies, a towel and a pair of Scott’s shorts dangling on a line no longer than a metre between the van and the power box following the side of the van.  So just in case some 5 foot tall person aimlessly wandering around a caravan park wants to hug the boarders of my caravan and hurdle over my tow-bar then they could possibly decapitate themselves on my undies? Although they would need to be on a motor bike to get enough speed up to do such a thing. Mind you, when I parked the van I was so happy I didn’t need to back in and I could just drive in. The closest van was over 100 yards away and I had a huge turning circle in front of me. “No” he insisted, “You have to turn it around, if the fire inspector comes in, it’s a big fine and he’s about due, I haven’t seen him here for a while.”

Now to turn the van around was not that simple, all the support feet had to be wand up, the power and water had to be disconnected and we had to go through all the rituals of loading the van back onto the car, this included the broom trick method.  Not defeated we did all that was required and turned the van around to face the road.  The best thing is that Scott thought it was very funny and laughed through the whole event, he brought an amazing light heartedness to a grim situation, and we both finished the mammoth chore and sat down laughing.

A great day only made more special by Scott’s dedication to re invent himself and that night he drew and he really enjoyed it. I let him use Textas, as it was most important to follow his mind-set about the small drawings he loved to do. My plan is to refine this and try to introduce different mediums to work with including oil pastels, ink, paints and pencils.

The next day we venture out into the country side to find more subjects for our new style…. 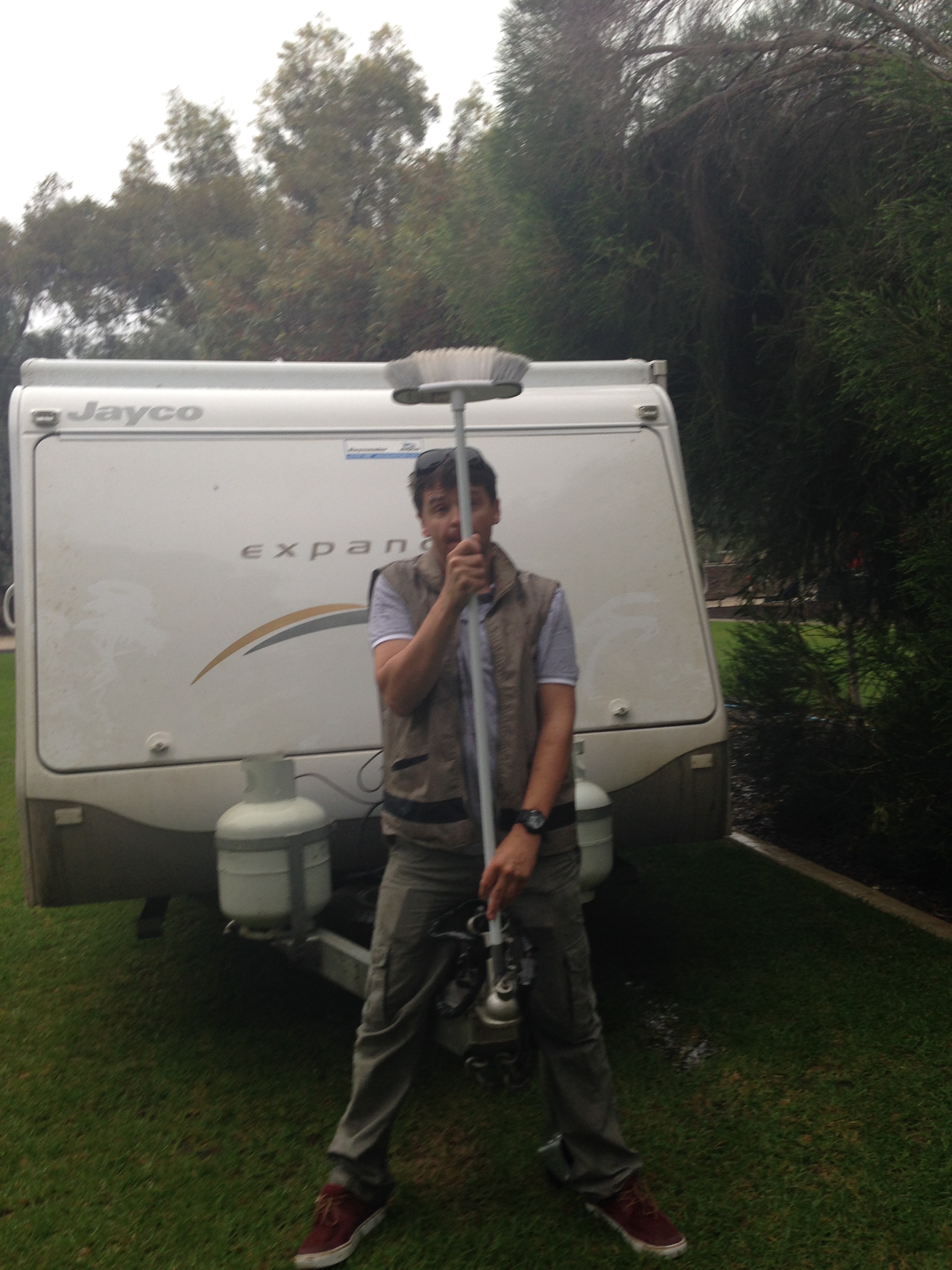