No windmills, but more beautiful country side. We followed the winding road down little twisting valleys over crystal clear creeks and up steep hills, passing little boutique wineries.

On the sides of the road grew enormous grass trees, a distinct Australian native plant, majestic in their enormous grassy crowns with long-stemmed flower heads resembling black spears, many of them in clumps of three or four.  I would love one in my garden, there was a moment when I thought, I could get across the border with some baby plants, but my conscience got the better of me, so I just took photos.

We came out at an intersection and a sign showing we were very close to Goolwa, turning left we followed the small, country road until we came to a beautiful little township and there was the bridge in all its glory, challenging us to enter the forbidden island and complete our journey. 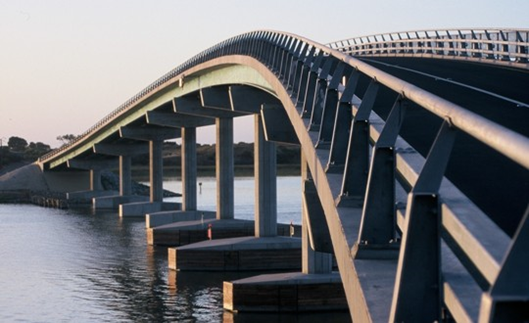 It’s a very impressive bridge, similar to a boomerang, it’s a steep entry climbing over a high bending peck and returning down to the opposing road with another steep descent. I’m not sure if the aborigines knew what they were doing, but somebody did as the real estate on the island is grand and very expensive. If this legendary land was based on fertility it became very fertile for some land developers when the bridge went up. 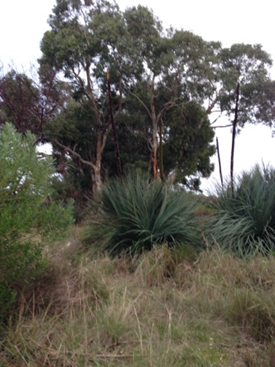 It was another good 30 minute drive to get to the rivers exit where it emptied into the ocean. Scott kept drawing and enjoying the drive. It was an over cast day and I was feeling a little sad as our adventure was coming to a close.  My mind idly wondered over places we’d seen people we’d met, the day we had to turn the caravan around after one of our best camp set up days, quiet moments watching Scott sitting on the ground drawing on the shores of the Murray.   Teasing Scott with “good night John boy”, “home James and don’t hold the horses” and his insistence his name was Scott.  The caravan rocking us to sleep at night as Scott’s Tourettes persisted, and the multiple crossings over the Murray River changing states backwards and forwards like flipping the pages on a book.  So many memories to keep and so many lessons learnt.

I started a conversation with Scott about our trip and I was really surprised he was a willing participant in my reminiscing and he also had his special moments including several bakeries and pubs and how he really did liked Mildura. Scott kept working on his drawing and it seemed ironic that’ at the moment he finished we pulled up in the car park and there in front of us was one of the most beautiful sights. Between us and the horizon was a picture perfect landscape, the foreground edge with windswept, tall grasses capped with an endless creamy, beige, smooth beach washed by the outgoing tide over a grey smooth lake. Between the beach and the sea lay two points of land pointing in towards each other divided by a watery gap endlessly flowing out to the sea.

There it was the great Murray River finishing its journey and joining the rest of the world. I felt like I was saying goodbye to a friend who was about to go on a trip, I was happy and sad. I would miss the adventure each day of finding my watery friend and sharing warm days, blue skies and constant inspiration, the teasing motivation to finding the next town, the next bend, coaxing us to follow and explore the country, our relationship and our hearts.

But my best friend right now was Scott, we got out of the car and Scott proudly showed his most recent work and was really ecstatic at what he had achieved. This beautiful oil pastel satisfied all his needs and he was excited to have found the artist inside himself again. 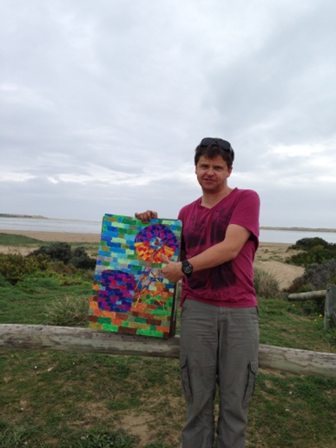 He ran down the sandy gutter to the beach and appeared to take in all its glory or maybe he was celebrating the end and now we can finally get home.  I took endless pictures of Scott and his art, plus numerous coached videos of Scott running on the beach and telling the story about our trip.  Scott found a fisherman to chat to and once again the bewildered look on his face as Scott identified and noted his date of birth and confirmed his age. Like all our past encounters with people meeting Scott he warmed to him and chatted about fish and asked if Scott liked fishing.

It started to rain and seemed like a fitting moment to get back in the car and head back to our little cottage on wheels, as Scott now refers to it.   Scott wasn’t quite as elated as I was about our day, it was a strange feeling of success, completion and satisfaction and I was sorry he didn’t experience the same emotions and feelings to share with me.

I emailed Geoff and a few friends to tell them we had arrived at our destination. They were great and there was great SMS applause.  I knew there wasn’t a welcoming party at the end or champagne, after all it was Scott and my adventure and it wasn’t something everyone could share.

I was cheered up by a flock of Geese meandering around the bottom of the orange trees in an orchard alongside the road and I remembered how my friend Sandy loved animals and kept a few geese, so I took some photos with an idea of painting something when I got home. Scott was getting a little edgy, it had been a very long day and he was ready for dinner and a shower. 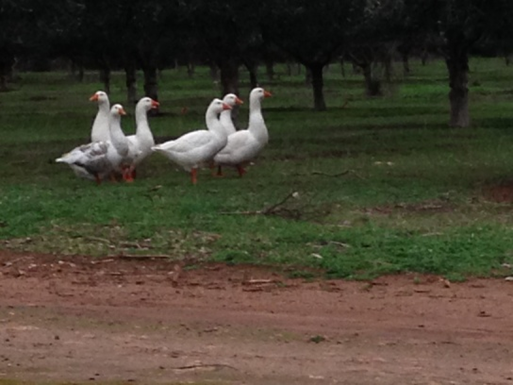 We celebrated the events of the day with a bottle of champagne back at the van and Scott had a very large bottle of real coke, none of that diet or zero stuff, plus fish and chips.

That night I was talking to Geoff and I got teary as I started to evaluate what Scott’s issues were and it crossed my mind for a moment that Scott may not get any better and maybe there is more wrong than I had confessed to myself or maybe I had drunk too much champagne?

Immediately Scott came over to comfort me and wondered why I was crying.  Nobody can tell me autistic people don’t recognize emotions and want to help, often they don’t know how or what to do.  Since this trip together it’s like he is more in tune with my emotions and his own behavior, there is so much Scott can do and so much more he could have in his life, work, friends and interests but his autism limits his ability to seek and plan the future, he relies on lessons from the past and from day-to-day experiences, he needs to be introduced to all these things and coached on how to deal with them.  It just makes me so much more determined to find him a job when we get back to Warrandyte.  We have tried so hard to find the door to his freedom in our community including the organisations that are supposed to assist people to find work. I have found these to be a gross waste of the government’s money and they whittle away at ones confidence and strengths.

If anybody out there has any work or ideas please feel free to contact me or Scott, if you’re reading these blogs I’m sure you will be getting a picture of a really nice, young man with some good skills, you just need patience, the rewards are multiple and great.

The drive to Mt Gambia to meet Geoff was very confronting …