Second night at Corryong, Scott has really tried to stop his constant moving. I had trouble sleeping so it was very apt that Scott told me I had kept him awake with my constant wriggling and could I please try to keep still!!

We decided we had to move on from Corryong and head west as the nights were getting very cold, but we were disappointed to leave such a beautiful place.

We were up pretty early and starting packing; it was the first move since we left Melbourne where everybody had helped us. It was a little daunting because this time we were alone, or so we thought.   Most of the packing inside the van was done when Kim and Phil came down to make sure we were ok and to wish us good luck on our travels. They are the most wonderful people and own and manage “Clack Clack” Caravan Park at Corryong, if ever you come this way please stay with these guys, you’ll love it. www.colaccolaccaravanpark.com.au

The expander van has procedures that one has to follow religiously to order. First make sure there is nothing above the roof line when it’s folded down, next disconnect the water and power and then fold the van up. This starts with the ends, which when you arrive open up to make beds, then bring the roof down and lock each corner into place, turn the gas off and check inside that there is nothing that will move around once you’re on the road.  Next comes connecting the van to the car, easy! Scott and I with no experience should be able to do this from our brief training prior to leaving.

Thank god for Phil and Kim, the only thing I regret is not videoing all of the next part. Phil is a charming character and his partner Kim is as equally charming, an attractive blonde who is very kind, who caught Scott’s eye immediately.  Scott quickly warmed to Kim and I later found out how old she was but I won’t give that away. Anybody who knows Scott appreciates his fascination with people’s ages and birth dates and he never forgets, even if he meets you years later.

I cannot express enough how impressed I was with how Phil took Scott on board and as an equal male proceeded to give directions; the caravans stabilising legs had to be wound up, then the jockey wheel had to be raised to match the height of the tow bar on the car. Phil patiently let Scott work through all of these exercises and Scott was amazingly focused and listened to Phil. Next was lining up the tow ball with the vans coupling.  I got to back the 4wd up under Phil and Scott’s directions; once again Phil had some great ideas, like drawing a black line on the back window with Phil then showing Scott how to straddle the caravans tow bar, I had to line up the mark on the window with Scott’s nose (this is a little difficult as Scott does tend to move a lot), but it was perfect.

Phil made us do it again for extra practice. He then went through all of the procedures required to hook up the van and its accessories emphasising “don’t forget to let the hand brake off!” One more check all around including the indicators and brake lights and once again Scott got a great lesson on how to tell me what to do.

All was going well, until no brake lights. Yes we had blown the fuse; I have no idea what that is but Phil did and with all the patience in the world he spent the next half hour sorting out the fuses.  This was great because Scott and I got to meet Pippa the giant crimson Rosella, who Kim kindly took out of her cage so we could have a better look.  I had heard Pippa earlier in the morning and I was amazed as she whistled and chatted away, a very talented bird.  It is a good feeling knowing Pippa has a really good life spending a lot of time in the house and sharing a quality lifestyle with Phil and Kim, a very happy bird.

Problem found, the connection between the van and the car for the brakes and indicator lights was upside down and kept shorting the fuse.  Phil assured me a couple of cheap 10 amp fuses and we would be on our way, but in order to do that we had to borrow other fuses, this included the electric windows and dials. Scott and I were incredibly grateful; we said our good buys and headed off to buy some fuses in Corryong.

A chilly trip with the windows down but we arrived at the BP service station and started searching for our important fuses, when there behind me was Phil.  Phil and Kim had followed us into town to make sure we were OK.  What wonderful people and I want to say Kim and Phil you haven’t heard the last of us yet. 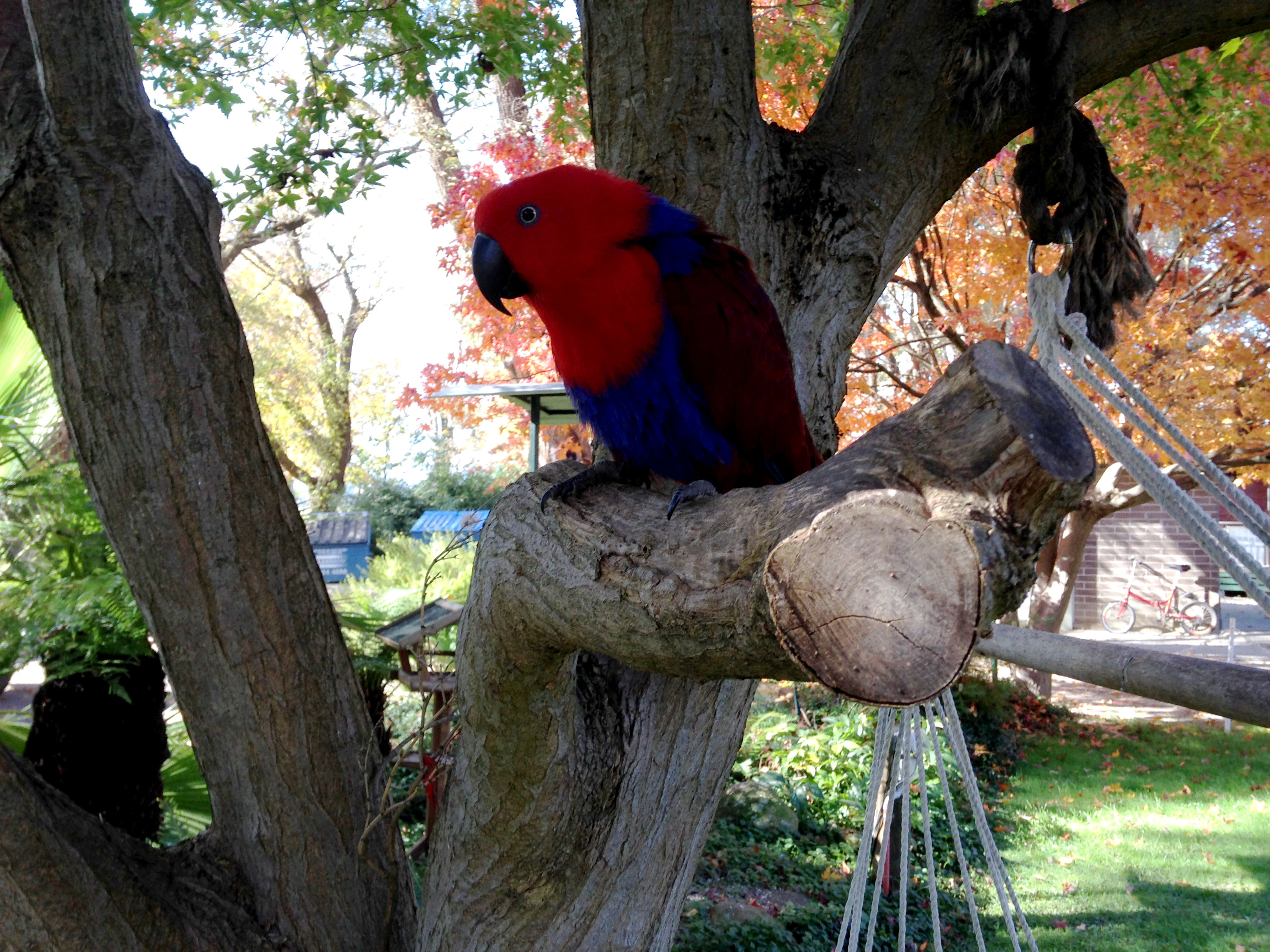