Food is essential to Scott.  But what is a balanced diet? I have made Scott’s life miserable by controlling our diet to be gluten-free and fat-free, telling him to stay away from preservatives and not to drink coke, as so it seems sugar is the modern man’s poison. None of these are supported by any scientific research, just panic buttons and internet garbage and hear say, hoping I could fix autism. It has made little or no change to Scott’s behaviour.  Autism, as many intellectual disorders, is far more complicated than modern foods or preservatives or sugar, if I could fix it with food, I would have discovered this a long time ago.

What’s more important is a full tummy. I once went to a lecture where I heard food passes through the gut and is then broken down to a fluid, then further reduced to pass through the walls of the intestines and after amazing designs by Mother Nature into the blood, where it is transmitted to the needy organs and systems.  Here is where peptides are produced, apparently these peptides have a large influence on the brain and how it function. I’m not an expert on this nor do I have time to learn all the ins and outs of the process so I have a better understanding of how Scott’s brain functions, I can only work on what I observe and what I can provide with minimal inconvenience and agony to Scott.

One of my observations was Scott and I needed breakfast, it appears to be the most important meal and strangely it’s the one you least feel angry for.  I often miss breakfast and I now realise it really messes with my day.  For Scott and me its best if it’s high in carbohydrates, as this appears to be very satisfying and must bring out the happy endorphins that make us feel good.  I also discovered we were at our best if we didn’t apply the three meals a day routine, something I inherited from my family, who had very strict rules that 3 meals a day were essential and there was a religious sequence to how they were put on the plate, especially ‘meat and 3 veg’, a white one, a green one and a yellow one.  I have discovered that’s not how Scott or my metabolism appears to work.  If either of us was really hungry again around 10.30 or 11am, we had another  reasonably good meal, then didn’t have lunch till 2 or 3 pm in the afternoon followed by a very light salad and meat style dinner and nothing to eat till the next morning.  We discovered we were both very happy with this routine and Scott very rarely if ever, asked for extra food, something he really loves and usually has too much of.  This appeared to suit our disposition and needs, plus we both lost weight and we slept well especially when the rocking stopped.

Morning came after a night of heavy rain, so under duress and with the thought of packing up in the rain we made up our minds to move on.  Swan Reach was our target, settle there for the night and have a day to wander around, maybe find some more inspiring subjects.  Everything went well till the jockey wheel became an issue again; I have decided they call this a Jockey wheel, because just like a horse race it’s very unpredictable! I thought all was well when we set up the van on arrival, but the jockey wheel had sunk into the wet, sodden grass during the night and we couldn’t get it up high enough to put the tow ball under the hitch, lucky from our past experience we knew what to do. Scott and I started searching for anything we could use to build a support under the tow bar of the caravan, remove the jockey wheel, then place it in a better position and wind it up high enough to get over the tow ball.  We were drenched by this time but actually dealt with it pretty well, finding some stone bricks behind one of the cabins. Finally, jockey wheel in place, the loading procedure was completed, we looked at each other, saturated and covered in mud, but once again Scott’s odd sense of humour lightened the moment “it’s just mud and it looks like chocolate, doesn’t matter mum“ in his funny little brush away ‘Que Sera’ style.

This delay was only surpassed by the fact I didn’t know how the ferry system worked.  Morgan was another country town on the Murray River that used the free ferry to cross from one side to another town on the other side.  Rather than use the Ferry, which in my mind didn’t seem to match where we were going, I thought we had to go back down the highway and back onto the new road to go south, only to end up at the ferry on the other side of the river which took us back to Morgan, it was like ground-hog day in the rain.

We finally worked out what was where and headed for Swan Reach. Once again the country side changed and although it was raining it had a particular beauty of its own, I still find it difficult to think that this is just one country, but each state has its own identity, even the culture changes a little bit.  There were lots more orange groves and they were better manicured than ones we had seen earlier, almost perfect paddocks or rolling hills that looked like bright, green ,velvet blankets had been thrown over them, very little live stock, but the signs of more vineyards coming to consume this beautiful country was, a little sad.

We arrived earlier at Swan Reach as it wasn’t far down the highway. It didn’t have much to offer, it is on the Murray River but it was more like a holiday village for campers and caravans and of course it had a pub, so we pushed on.

The Murray now dramatically changed, it appeared to be very deep and more of a constant grey/green colour as it cut through an enormous gorge most of the way to Upper Murray Bridge.  In parts it joins other water ways and spreads into large lakes on a flat landscape, the straight up cliff faces rich in red soil mixed with clay and large boulders. 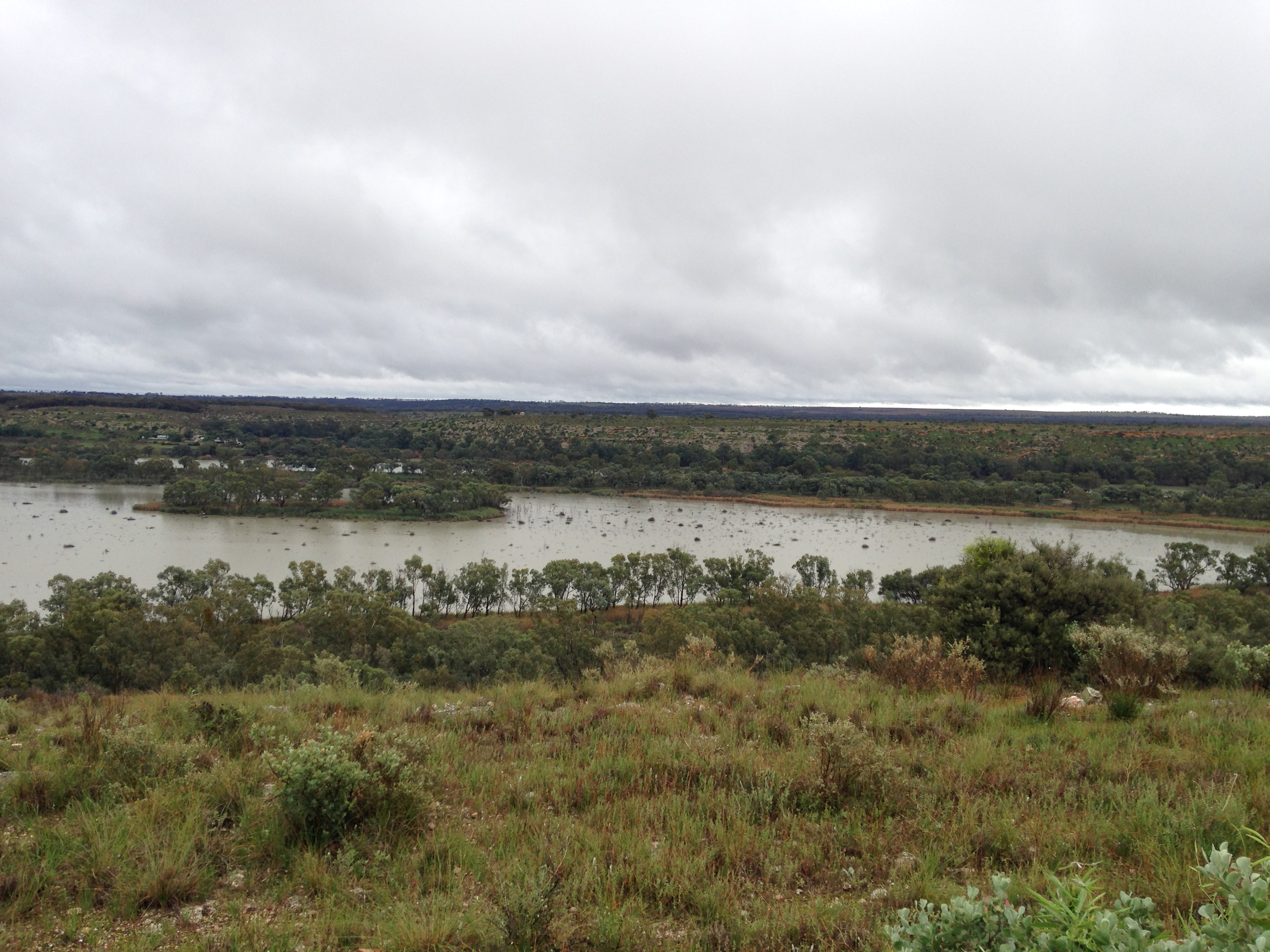 Many fine Australian artists have followed this trail including Arthur Streeton (1867–1943): landscape painter, born near Geelong, he loved the South Australian bush. After this trip I can appreciate how moving the Australian out back is. No matter how dry, how wet or how big, it’s grandeur and beauty draws the artistic, creative mind to its rich heart including photographers, writers , poets and the list goes on, even adventurers like us.

Scott’s art is more driven now and he is starting to instigate his own ideas, he is really enjoying his new-found style. As we drove we talked more about what he wants to do and how he feels about his art and I gathered that although his autism played a role, it was also the enemy of his creative side because the disorder finds it very difficult to accept change and to have forward vision, so he is often limited to only draw on his experiences even though he has a great natural instinct for perspective and colour.  He has been able to draw since he was three years old and not long after appeared to enjoy the world of colour.  We named him ‘Rank Xerox’ because at four and five he could duplicate anything he saw into a drawing. We lived with a range of Walt Disney characters and other interesting subjects for many years, now it’s Harry Potter that has proven to be a great inspiration to Scott, once again the introduction to something he could by inspired by.

On to the Upper Murray Bridge almost in tears… 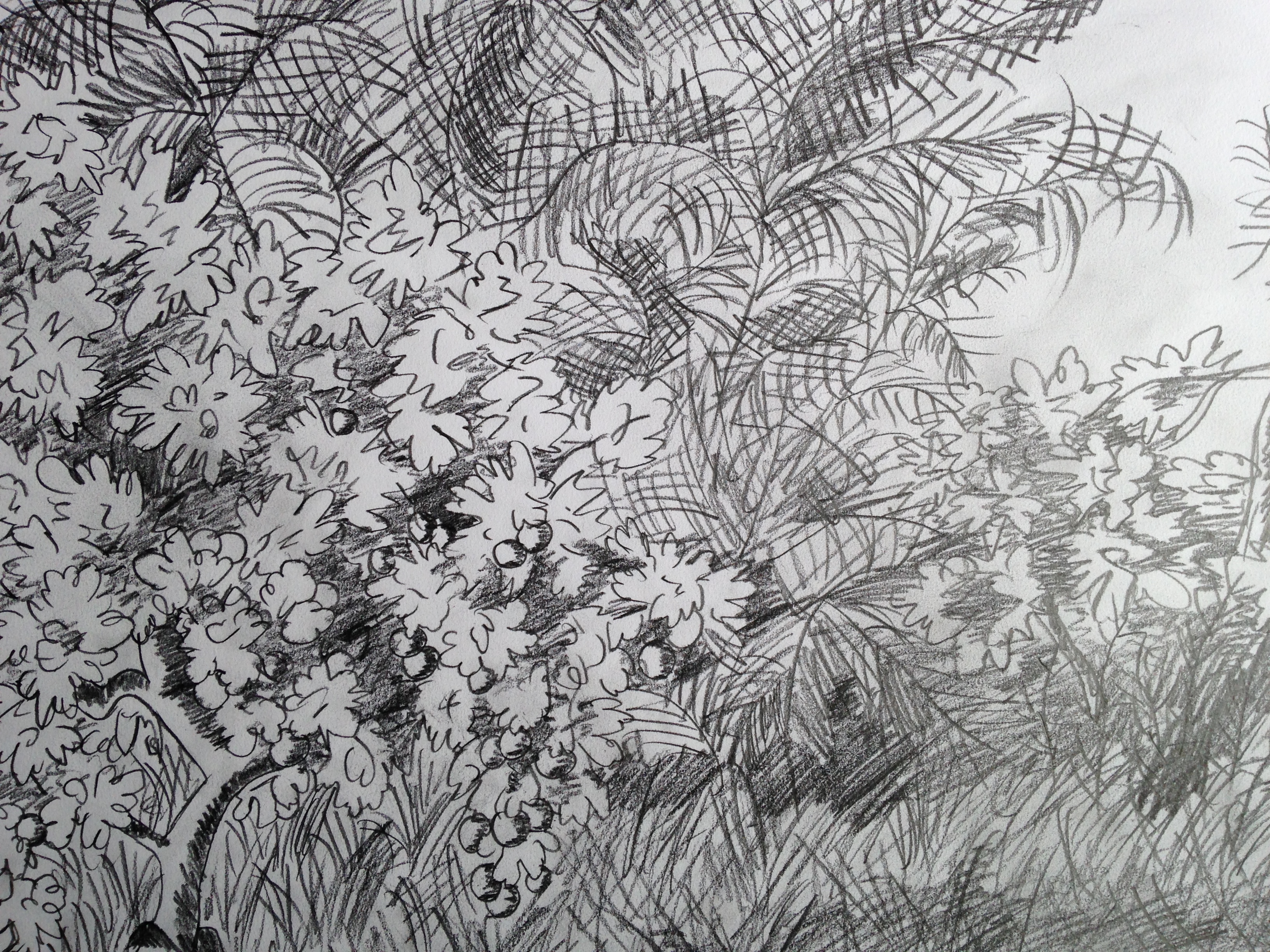